hawo GmbH: A Solution For Professionals

The hawo GmbH in southwest Germany is the leading address for craftsmen from the areas of interior design and facade work. In order to be able to watch over the events in the sales and storage areas, the specialist retailer increasingly relies upon video security technology from eneo. 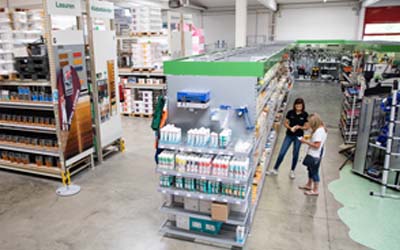 Anyone in Hesse, Rhineland-Palatinate or Baden-Württemberg who needs high-quality products for the design of facades, interiors or floors will find what they are looking for at hawo. For almost one hundred years, the family-run manufacturer and wholesaler with its head office in Heppenheim in Hesse has offered everything that painters, plasterers, floor layers, interior designers and other skilled tradesmen need. For hawo offers its customers a considerable variety of products. In addition to the proven hawo materials and systems, the more than 12,000 items in the range also include the products of many well-known manufacturers. Add to that a professional colour mixing service, offered by all thirteen branches, and a range of additional services tailored to meet the needs of specialised tradespeople. The spectrum ranges from planning to sales, the rental or repair of machinery, and, last but not least, seminars and workshops that take place in the training rooms in Heppenheim. 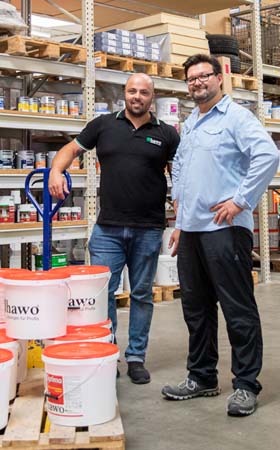 Even in the retail trade, inventory differences are unfortunately a constant theme. For this reason, in 2016 a video security solution was installed for the first time in a hawo market in the specialist store at the Heppenheim head office, which also includes a warehouse with a surface area of more than 6,000 m². The Aschaffenburg-based company, Christ & Rosenberg Sicherheitssysteme GmbH, which offers its customers a comprehensive service package for burglar and fire alarm systems, smoke and heat exhaust systems, and time recording and access control systems, was responsible for the consultation, planning and execution. The range of services of the VdS-certified company includes professional advice, planning and installation as well as expert maintenance and customer service. In the case of hawo Heppenheim, the Aschaffenburg security professionals recommended an HD-TVI-based video security solution. With good reason, as explained by Tim Stürmer, Managing Director of Christ & Rosenberg Sicherheitssysteme GmbH: "As everywhere, to begin with the central question was: what do I do with the camera specifically at this point and what resolution do I need for this? In Heppenheim we have a storage area with relatively large parts. Therefore the full HD resolution to which HD-TVI was still limited at the time of installation was absolutely sufficient for the position detection. Coax-based systems also offer a clear advantage in terms of latency, price and reliability: unlike an analogue camera, an IP camera is and always will be a computer. And computers have a higher failure rate than analogue devices. Therefore, coax-based video security is still of interest. Even more so, since HD analogue has caught up in terms of resolution and now cameras are available which achieve much higher image resolutions than Full HD". And since Christ & Rosenberg had already had good experiences with eneo in the past, at hawo were installed central HD-TVI cameras and a hybrid recorder from the eneo COAXIZE line, which have since been reliably monitoring the critical areas. 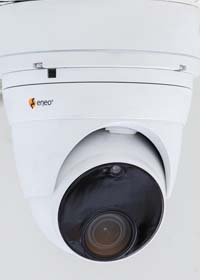 A promising start was made with the eneo HD-TVI system. It followed up the Heppenheim site with the hawo specialist store in Pforzheim. Here, Christ & Rosenberg installed another eneo video security solution in 2019. However, only IP cameras from the eneo EN and Candid series are used in conjunction with a network video recorder. Tim Stürmer: "In Pforzheim we had a different starting point - relatively long aisles and at the same time a very large number of small-scale articles in the sales area. The point here is to combine the maximum overview with the highest possible image quality in the detail enlargement. That's why we've consistently deployed high-resolution IP cameras positioned to provide a complete overview of the critical areas. Specifically, we installed several eneo domes and bullet cameras, which each provide four megapixel resolution video images. When attaching the domes we were pleased that we could use the eneo connection box, because it allows a clean surface mounting and allows the cables in the box to be connected quickly and easily". 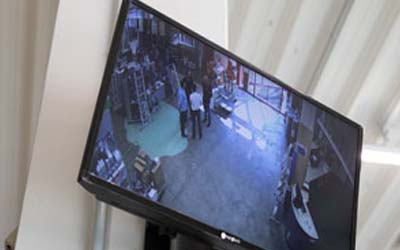 An unmissable monitor in the entrance area acts as a so-called "confrontation screen". Tim Stürmer explains: "The screen serves as a deterrent to potential shoplifters. Anyone who enters the store sees immediately that they are being monitored here".
But sometimes temptation gains the upper hand, as Branch Manager, Giuseppe Sirone, knows only too well. "Just one day after the cameras were installed in the market here", the store manager explains, "the first shoplifter was convicted". Based upon the high-quality video material, which is produced by the powerful lenses and camera sensors, the identity of the perpetrator could be determined beyond doubt. And also the type and amount of the stolen articles were clearly visible due to the detail magnification using zoom. "Without the video images we would not have been able to prove that", Giuseppe Sirone is convinced.

However, the benefits of the video security system are not limited to pure theft prevention, as Jens Buchmann, the Head of the hawo IT department, explains: "With the cameras, even errors and incorrect data can be easily resolved.

So you can clearly show on the basis of the video images which articles were present when loading them onto the pallets".
Giuseppe Sirone agrees and adds: "The system brings more transparency into our internal processes. The high-resolution camera directly in our goods reception area" – this involves a bullet type camera – "oversees exactly the area where the pallets are unpacked.

As a result we can also understand in any case of doubt, based upon the video evidence, what exactly was delivered".

The outdoor area is monitored by robust bullet type cameras from the eneo Candid series. The IP cameras in solid aluminium casing are equipped with a sunroof, a movable wall arm and a motorised varifocal lens, and offer a resolution of five megapixels. 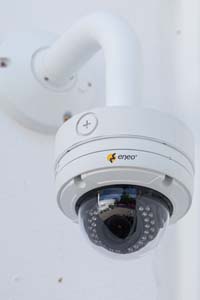 If necessary, relevant image details can be enlarged with the triple optical or sixteen times digital zoom. A network dome with a 360-degree rotation range and a maximum resolution of three megapixels overlooks the events occurring directly on and around the pallet area near the delivery zone. Like all the EN series cameras, it has basic video analysis features such as motion detection, tamper protection, virtual tripwire with counting and direction detection, range monitoring and defogging. The technical features of the outdoor cameras also include the D-WDR image enhancement function, which compensates for differences in brightness in the surveillance area and thus ensures meaningful images. The Branch Manager, Giuseppe Sirone, explains what the high-resolution surveillance of the parking lot and the delivery zone is all about: "We take back from our customers what remains of the composite thermal insulation systems which we supply and deliver in our bags, and send them to our head office in Heppenheim for final disposal. In the past, it has often happened that private individuals and competitors have dumped leftover waste and other garbage in bags and without sorting it – garbage which the colleagues in Heppenheim then had to spend valuable time sorting for disposal. Not to mention the cost. Since the installation of the outdoor cameras, we have seen a huge reduction in this area. And even with the random parkers, who use our customer and staff car park as the starting point for their private shopping expedition, we have no more problems. People come in now and ask, which then usually goes well. But just like that, no cars are parked here anymore".

The video data is recorded locally on an eneo IER network recorder, equipped with two hard disks with a capacity of four terabytes each. The entire system is managed via a server with the eneo Center software. 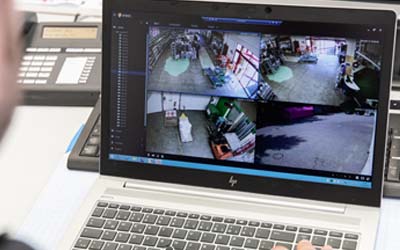 In addition to standard features, the video management application provides an event monitor with a site map and built-in live view. The images received from the cameras in Pforzheim can be viewed both directly on site and remotely from the head office in Heppenheim by the employees authorised to do so. Giuseppe Sirone about his experience with eneo Center: "For me, the software is extremely easy to use. Once the system was set up, we went through this together once, then I clarified in a phone call with Mr Buchmann the one or two minor questions which we had. Since then, everything has been running smoothly and completely satisfactorily". Which summarises what has happened to date at hawo with video security technology from eneo, and which can at the same time be transferred to the entire experience. Jens Buchmann sums up, "In view of the noticeable improvements and the clear benefits, we will in the future equip other branches with video security".