Solutions for stadiums: Violence in stadiums is not only continuously increasing in the 1st and 2nd divisions of the Bundesliga. Video surveillance can provide effective assistance in enforcing stadium bans.

So-called "Ultras" do not come for the athletic event, but rather as "violence tourists". They let out their aggression both against the other team's fans and their very own team if the game isn't going as they had hoped. Unfortunately, this development was observed last season. Stadium operators are wise to at least keep the violence outside of their stadiums. A professional system of video surveillance which helps to clearly identify people is crucial for this purpose because it aids in enforcing stadium bans more consistently. Due to the large area to be monitored and the need to identify people as clearly as possible, cameras with very high resolution should be used throughout the entire stadium. For one thing, security personnel must cover large areas quickly. Secondly, suspicious activities have to be reviewed fast.

Classic box type cameras are mounted in weather-protected housing at the entrances and above the stands. Equipped with wide-angle lenses, they cover the entire stadium and ensure an overview. Additionally, in this way individuals who were banned from the stadium can be hindered from entering the building and stands directly in the entrance area.

However, the cameras at the core of the installation are installed in housings protected in compliance with IP66 on pan & tilt heads and can both change the camera's line of vision and display details in telephoto in high definition thanks to their high-performance motorised zoom lens. 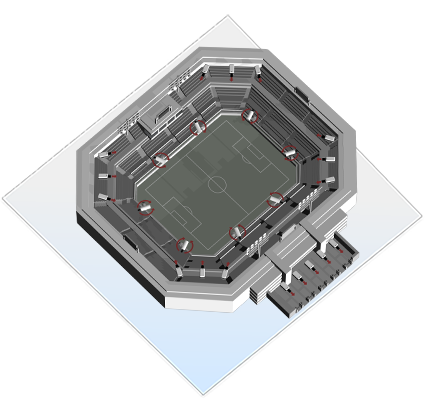 The current eneo pan & tilt systems are a logical further development of the successful VPT-42. In combination with the proven and rugged stepping motor, powerful spur gears achieve panning speeds of up to 100° per second. Improved control of the stepping motors by 1/16 step ensures excellent smoothness even at lower speeds and guarantees high drive dynamics. A fast 32 bit ARM processor manages all the PTZ functions and at the same time offers storage space for several RS-485/422 control protocols. As an option, PTZ domes can also be used at these positions.

In order to identify people clearly and consistently enforce stadium bans which were already declared, it is necessary to have resolution which is as high as possible. For this reason, when using IP cameras, we recommend reverting to Full HD cameras with 1920 x 1080 pixels.