Solutions for transport companies: The challenge of logistics companies lies in the size of the company premises.

Wherever valuable goods are stored and transported, thieves are not far away, particularly when it is a forwarding agent's car park which appears to be poorly guarded. But the threat can be even more serious, for example if you operate in the international movement of goods and transport air freight to the United States. In this case, even a forwarding agent located in Germany can become the target of international terrorism. But more trivial reasons also speak for the use of professional video technology, such as insurance premiums which are significantly lower with the accordant security as they would be without. Moreover, accusations regarding transport damage can easily be invalidated because with the video images, it can be proven simply whether a shipment already arrived damaged or if the damage occurred during transshipment. The requirements which are imposed on logistics companies and forwarding agents are increasing and becoming even more complex in light of ever higher delivery quantities. Requests for delivery dates which are "just in time" are referred to as an example.

The indoor cameras should also be protected by housings. Plug & play cameras in bullet housings can be used well because they can also monitor poorly lit transshipment warehouses reliably due to their integrated IR illumination and the switchable IR cut filter. In order to monitor large company premises without employing additional staff, value should be attached to automatic analysis functions and intelligent alarm management which only inform the security personnel in case of an actual alarm. 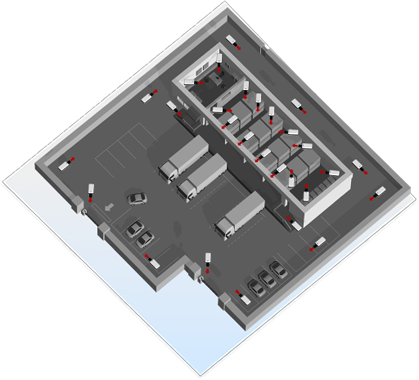 As an alternative to the cameras described here, PTZ domes can also be used. The slightly higher price is normally offset by the zoom functionality and moving camera module, which thus provides even higher flexibility in video surveillance.

Due to the size of the property to be monitored, supplementing the outdoor cameras with external spotlights is recommended. White light spotlights are a direct deterrent which immerse the environment in bright light. However, they can only be used if they don’t bother neighbouring residents. Alternatively, it is possible to use discreet IR spotlights whose light is nearly invisible. As a rule, the spotlights switch on automatically using a sensor-controlled twilight switch when the amount of light diminishes.