Solutions for hospitals: There are numerous necessities for video surveillance for hospitals. The example featured here shows the maternity war

Video surveillance in hospitals is the subject of controversial debate, much like installing corresponding technology in schools. The fact of the matter is that hospitals want to convey a sense of security and safety and that video technology can play a role in doing so. This particularly applies to maternity wards.

The goal of the application is conveying security without conspicuously displaying the technology used. Fixed domes are ideal for this purpose because they can be installed nearly invisibly on the ceiling thanks to their partly very flat design. Because no one stays in the stairwell for a significant length of time, the use of boxed type cameras can be reverted to there. Moreover, this signalises: Warning – this area of the hospital is under video surveillance. 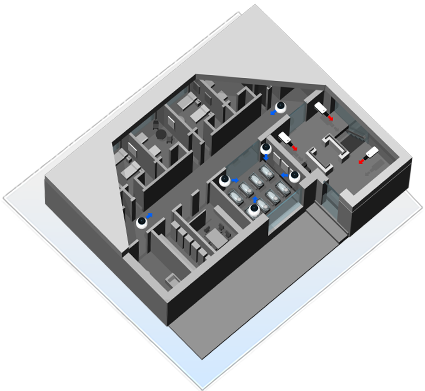 The sample solution featured here shows the maternity ward where both the hallway and the nursery are monitored with fixed domes. The fixed domes are day/night models which – if required – also have integrated IR illumination so that clear pictures are also produced in the dark. There is also an option of reverting to versions with audio support.