Solutions for schools: Video surveillance technology in schools must either be installed out of reach or with vandalism protection.

Video surveillance in schools is a much discussed topic and cannot be realised easily because numerous data protection issues must be observed. However, if one considers only the damage caused by school vandalism, it becomes obvious how important this topic is. For example, the Darmstadt-Dieburg administrative district spends 120,000 EUR per year just on replacing school windows which were wilfully destroyed. But the theft of computers, monitors and projectors as well as violence among students are common in many schools. Numerous examples where vandalism and theft no longer occurred following installation indicate that video surveillance is very effective in preventing criminal offences.

High-resolution cameras in the classic box type design which are protected from wind and weather are used outdoors. There is also an option of reverting to our cameras in bullet housing. The cameras are mounted high on the building, offering a very good overview without being directly accessible. However, if you are still worried that the cameras become the target of vandalism , there is also an option of reverting to the weather-protected versions of our dome cameras which are available either as a fixed dome or PTZ dome, if higher flexibility is desired.

If there is a lot of commotion in the schoolyard and hallways (e.g. right before school begins or during breaks), recording is continuous. While classes are in session, there is considerably less going on, so that a recording mode can be selected which doesn't begin until motion is detected. Because there is usually little or no traffic in the schoolyard and hallways after school lets out, you can generally switch to motion-controlled surveillance to reduce memory requirements. Of course the changeover is not manual, but rather automatic according to defined schedules. 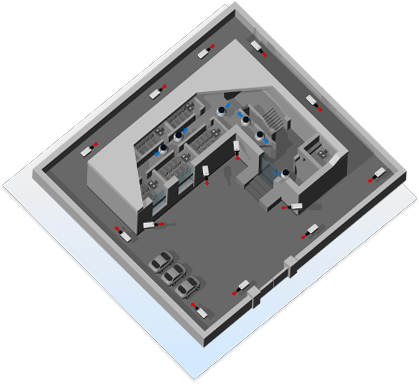 Individual decisions must be taken regarding which outdoor points should be categorised as neuralgic. For example, if bicycle theft is common, the corresponding storage space should be monitored. Other points include the teacher car park, entrances and schoolyards.

Because the cameras inside the school (depending on the ceiling height) might be easily accessible, dome cameras are used here which are well-protected against the effects of vandalism and even resist heavy blows without damage. Depending on requirements, there is a choice between high-resolution models or versions with PAL resolution. There is a concentration of the surveillance of the hallways and foyers so that teaching and learning in the classrooms remains relaxed without there being a sense of being observed.