High petrol prices might tempt even the common consumer to refuel "for free" and either simply drive away or only pay for a newspaper at the counter and "forget" to pay for the petrol. However, petrol theft is not the only problem which faces service station operators, Many service stations now resemble little supermarkets, and thus the requirements placed on the surveillance of these shops must be similar to retail requirements. Robberies are also not rare due to long business hours into the night, although robbery figures are declining. Service station owners expect an average of six percent inventory discrepancies, which can amount to approximately 50,000 EUR for a large service station. This is an amount which can be dramatically reduced by implementing a professional video surveillance solution, meaning that installation is normally amortised after just over a year.

All outdoor cameras are located in housings protected in compliance with IP66 to brave the weather all year-round. There is also an option of reverting to cameras in bullet housings which can be installed particularly easily thanks to their plug & play concept while they also possess advanced features such as integrated IR illumination.

In the service station shop, boxed cameras and varifocal lenses are used which view both the shop shelves and particularly the checkout area from both sides. It is possible to record the various video images in numerous ways according to individual wishes. In addition to permanent or time-controlled recording, the refuelling process itself can trigger recording if the system used is integrated in the Zelaris software solution via the OPC interface or in the video surveillance solution via the digital video recorder. 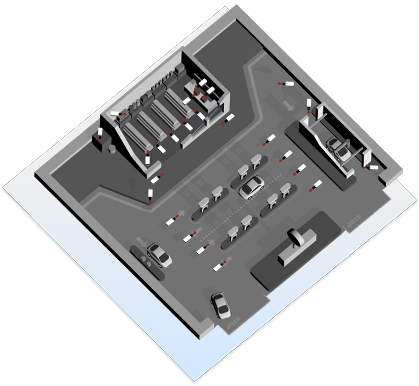 Near petrol pumps, particular attention is paid to recognising number plates. Therefore, high-resolution cameras are required which can also display minor details in razor-sharp resolution so that e.g. digital zoom can be used to focus in on important image areas in the recordings. The surveillance of the carwash is used to collect evidence in case of wilful or accidental damage (e.g. when carelessly entering or leaving the carwash), the cameras directly in front of the building monitor the entrance and night counter, and the other outdoor cameras are for additional protection of the company premises.

High camera resolution is not always necessary. For example, if there should only be surveillance when motion is detected, such as in this area which is rarely frequented, inexpensive cameras can also be used without any problems, such as those with VGA resolution.