Solutions for motorways and tunnels: Accidents in tunnels can be disastrous. Therefore, they score worse in the ADAC test if they are not under continuous video surveillance.

Although the probability of having an automobile accident in a tunnel is relatively low, accidents are a constant safety hazard because every accident has much more serious consequences in a tunnel than outdoors due to the narrow space and limited emergency walkways. This is why ADAC regularly tests tunnels in all of Europe. In Germany alone, there are approximately 300 tunnels with a total length of around 240 kilometres. One important testing criterion is whether each tunnel is under continuous video surveillance or not. This is due to the fact that only full tunnel surveillance guarantees that all safety precautions are immediately employed in case of an accident and that security personnel takes the correct decisions appropriate for the situation.

Bright streaks in images which originate from overexposed image areas which could be caused by automobile headlights are referred to as blooming and the smear effect. When selecting a camera, attention must be paid to the fact that there are corresponding functions which effectively prevent and minimise these negative effects. In addition, the cameras should be models with day/night functionality in order to provide usable recordings even in low lighting.

It is also important that the cameras have outdoor housings with hidden cable guides so that road salt and spraywater splashed up by the vehicles cannot affect the camera module and cable. A decision should be taken on site regarding whether the cameras should be mounted on pan & tilt heads as illustrated here. For example, one deciding factor is whether the camera should only keep an eye on one lane or several simultaneously, which would require more adjustment flexibility. In general, moving cameras should be installed in motorway junction areas. It is best if the cameras are additionally equipped with motorised zoom lenses in order to zoom in on events which are further away without quality loss. 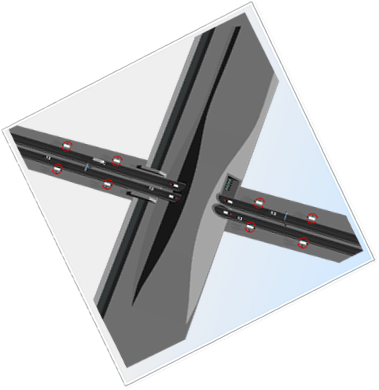 The cameras must be installed at a height of approx. five metres so that the clarity does not suffer, even with a high percentage of trucks. Because there is a primary focus on the pure detection of incidents for tunnel surveillance, spacing of approximately 150 metres between the cameras is considered absolutely sufficient.

Day and night, tunnels must be monitored via a control centre which can intervene immediately in case of an accident. It is not significant whether this control centre is located right at the tunnel as described here or at a remote location. What is important is that measures can be initiated immediately in case of an accident.Because of the option of also integrating other (building) management systems via the OPC interface, the Zelaris software solution in the control version is also particularly suitable here because it was developed especially for large control centres.