Over 600 outlets in Europe 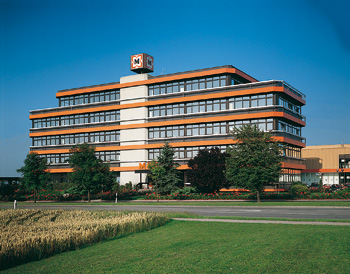 Along the way, company founder Erwin Müller upset the self-image of an entire sector with his revolutionary self-service health and beauty retail concept. In 1967, he went down in history as the "Rebel from Ulm" when he opened his locations on Mondays against the directive of the barbershop guild. Erwin Müller obviously wasn't particularly interested in the fact that he was suspended from the guild for this offence because in the following year he laid the foundations for the Müller stores which we know today when he opened the first barbershop which integrated the sale of health and beauty products. The success has proven Erwin Müller was correct. In the meantime, nearly 24,000 employees work in over 600 locations
all over Europe.

And Müller continues to grow – an average of 50 new stores are opened each year with a product range which includes CDs, toys and stationery and really sets itself apart from the competition. It is aproduct range which facilitates a shopping experience in a pleasant atmosphere with prices which Müller invites you to check against competitors' prices in their slogan: "You should compare our prices."

Müller ensures that prices will remain just as low in the future by using eneo video surveillance which has now been installed in over sixty Müller stores. Inventory discrepancies are a growing problem in retail and can lead to rising prices if they are not prevented effectively. Thus protecting honest customers is essential. At Müller, the installation of the systems is always in accordance with strict data protection regulations which are fulfilled meticulously by the responsible installation company using a thorough checklist and

Why did Müller choose eneo? “Based on the recommendation of our installation company, we carried out a three-week test in one location, and it was very successful,” explains Mario Messner, Managing Director at the security agency Müller Sicherheitsdienst Ulm MSDU. “Due to the high image quality, a lower recording rate was sufficient compared to another recorder model which we had in operation at the same time with 25 pictures per second. Because we wanted to keep the memory requirements as low as possible, it didn’t take us long to make a decision. We were also impressed by the price-performance ratio, which is significant when numerous cameras are being installed in each store.”

“The equipment is absolutely reliable”

Mario Messner has never regretted this decision, quite the contrary. “We now have numerous cameras, domes and recorders from eneo in operation in over sixty stores. The number is in the hundreds. The failure rate is so minimal that it is negligible. The equipment is absolutely reliable.”