No Chance for Bicycle Theft and Vandalism

With support from VIDEOR E. Hartig GmbH, the Oswald-von-Nell-Breuning School in Oberroden, Hesse has brought video surveillance of its bicycle stands up to the latest state of video security technology: the analogue system has been replaced by a modern eneo IP system. An on-site visit. 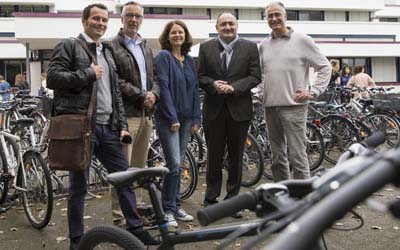 Again and again the bicycle stands of the Oswald-von-Nell-Breuning School (NBS) have attracted the attention of thieves. Unintentional damage to property and cases of vandalism occur more frequently.
After a long phase with relatively few operational problems, the ageing analogue video surveillance system finally stopped working; thefts and malicious damage to property then occurred to the extent that parents at the school conference demanded a resumption of video surveillance. "According to district regulations", explained Director Christine Döbert, "there may only be video surveillance for two years. If there is still reason after this time the system may be operated further, otherwise we are obliged to stop the surveillance." However, the video resolution of the existing system was simply no longer in keeping with the times, and the system had not been serviced for a very long time. Michael Krug, the Chairman of the Association, therefore approached VIDEOR E. Hartig GmbH who had donated the analogue video surveillance system many years ago. Again on this occasion, the company gave fast and unbureaucratic support to the school by providing all the components for a modern, IP-based video surveillance system: a complete package consisting of IP cameras, network recorders and the VIDEOR eneo own-brand control software.

Future-proof thanks to support and continuous technical updating 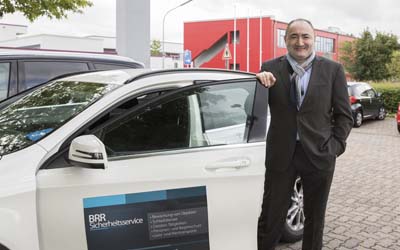 Mustafa Basak, whose security company was tasked with installation of the cameras, knows eneo and is impressed by the quality of the brand: "It's simply not enough to install a camera from manufacture XY, regardless of how attractive its functions may initially appear. Rather, attention must be given to technical development, i.e. the system should still work after four, five years. Does the manufacturer actually offer any updates after this time? Will the products still comply with German data protection regulations tomorrow? This question is also very important: Do I have a contact point if there is a technical problem? My experience to date is that some Asian providers, for example, don't perform particularly well in this regard, whilst a brand such as eneo really excels in these points, particularly when it comes to support and the subject of updates. This is why we are happy to recommend these products to our customers."

During the summer holidays Mr Basak and his employees professionally installed five eneo network domes on the school grounds. The cameras were position on the façade of the school building so that their lenses covered all the bicycle stands on the grounds. The IP dome is fitted with a 1/2.8" Sony STARVIS CMOS sensor and a motorised varifocal lens with a 2.8–12 mm focal length. With this lens the day & night camera delivers high-quality video imagery at a resolution of 3 megapixels (2048 x 1536 pixels).

Furthermore, it has the video analyses functions of motion detection, tamper protection, trip wire detection (with counting and direction detection), field detection and defog (automatic correction of weather-related image interference). In addition to the 28 infrared LEDs for night operation with an illumination range of around 25 m, the further technical features include the D-WDR, vertical view and boost image optimising functions. The latter raises the refresh rate as soon as the IP camera's motion detection detects movement in a defined area. The housing is made of solid aluminium and is IP66-classified. Camera housings that comply with this protection standard are dustproof and provide protection against strong water jets, such as continuous rain. The temperature range of the camera extends from -20°C to 50°C. In combination with the integrated infrared lighting the eneo camera therefore satisfies all requirements for reliable and all-year outdoor 24/7 operation. 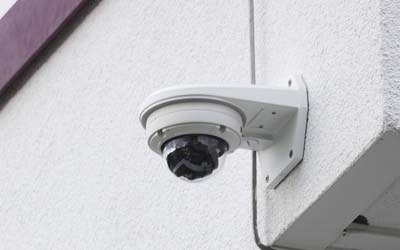 Installation was carried out with wall mounts and robust junction boxes that are available as optional installation accessories for cameras from several eneo camera series, and which were also part of the materials donated by VIDEOR E. Hartig GmbH.

Although the video cameras look over the areas under surveillance from very exposed positions as can be seen in the photos, they seem to disappear and merge into the terraced building architecture, because the compact design and neutral colour of the dome housing give the impression that it is apparently easy to oversee the cameras in passing – a not fully unwelcome effect as the pupils then don't feel bothered by the video surveillance of the schoolyard during their breaks. 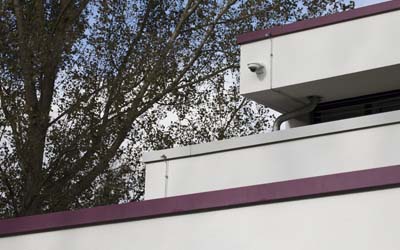 And this was evident during the on-site visit when a group of pupils asked for the reason behind the unusual visit, as they seemed surprised that the bicycle stands were monitored by video cameras, although as explained by Director Christine Döbert the pupils and parents had of course been informed by teachers and the parents council of the modernisation in advance, and the obligatory video surveillance signs could be seen on the school grounds. The recorded video material is only viewed when there is good cause, i.e. only when specific damage or theft is reported. And this was also proven to be the case shortly after the system was taken into operation when an apparently stolen scooter reported by a pupil was only found to be parked elsewhere. Otherwise, the recordings which can only be seen by the Director, her deputy Lutz Reeh and the NBS media technician are deleted after approximately 36 hours.

The video surveillance primarily therefore has a clarification role. The prevention effect of the surveillance becomes effective, according to Michael Krug, as soon as word gets around that the bicycle stands are under effective surveillance. "Because after all, the actual goal", added the Association Chairman, "is that nothing happens."

VIDEOR E. Hartig GmbH donated an eneo PNR series network recorder for recording. The PNR-5308 is a very efficient 8-channel full HD NVR with an HDMI and a VGA monitor output that enables simultaneous recording, playback and network transmission of video data in real time. All PNR recorders are delivered with an infrared remote control, optical USB mouse as well as the iRAS control software. The internal hard disk capacity is 3TB, but this can be expanded up to 12TB when required. This means the NVR can record the 3-megapixel video streams from the five IP domes in operation on the grounds of the Nell-Breuning School over a very long time in full HD and in real time. Full screen, 4-channel split and 9-channel split modes are available for playback on the monitor. Video search is very user-friendly and fast due to the time lapse, event log, motion and text input search features. The combination of user-friendliness, technical equipment and storage capacity produces an impressive overall package that virtually predestines the eneo PNR-5308 for small video security applications such as that installed on the grounds of the NBS. At the end of the joint inspection, Michael Krug again expressed his sincerest gratitude on behalf of the Association that VIDEOR has made an effective contribution to increase the security of everyday school life at the Oswald-von-Nell-Breuning School with the high-quality eneo devices it donated.