The Hilton Frankfurt City Centre invites city and business travellers to experience hospitality and comfort of a premium standard in the heart of the Main metropolis. The safety of the guests is ensured by a video security system, which has been modernised with eneo video and recording technology. 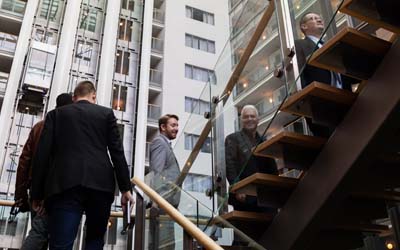 The Alte Oper, the Römer and the Goethestraße shopping mile only a short walk away. 342 rooms with a view of the tranquil Bockenheimer Anlage park or the impressive skyline of the Main metropolis. Spacious and modern equipped conference rooms. A fitness studio with an indoor swimming pool. Top class hotel facilities and gastronomy: welcome to the Hilton Frankfurt City Centre. In addition to the attentive staff, an extensive video security system ensures that the guests feel not only comfortable but also safe.

Like the hotel itself, it has been modernised and constantly redeveloped over the years, always under the professional guidance of the Göppingen-based Digicom Informationstechnologie GmbH. Most recently at the beginning of this year, when the number of video cameras was once again increased. The modernised system now consists almost entirely of eneo cameras and thus combines different technologies, such as analogue, IP, multi-signal and EPOC. Recording and video management are carried out exclusively with eneo technology.

Reason enough for us to “check in” with Tamer Vural, the Managing Director of Digicom, for a site visit to the Hilton Frankfurt City Centre.

When we entered the lobby of the Hilton Frankfurt City Centre with Tamer Vural on this Friday morning, we were met by a friendly man with a broad smile. A friendly handshake, a pat on the back and jokes as a greeting. The Facility Manager, Marko Stanic and the Managing Director of Digicom are old acquaintances. Since its opening year of 1998, Digicom Informationstechnologie GmbH has been a partner in matters of video security. At that time it was still called video surveillance and the Hilton's first CCTV system consisted of 26 analogue cameras and several recorders. The recording was made on cassettes which have long since disappeared into media history. During a first modernisation in 2009, the Digicom team converted the installation into a hybrid system. “Analogue where possible, IP where necessary” was the motto, in order to be able to continue using the existing cable infrastructure as far as was possible. Finally, in the course of the comprehensive modernisation of the hotel, which was carried out on the occasion of its twentieth anniversary from the autumn of 2018 to the spring of 2020, not only were the rooms, corridors, atrium, hotel lobby and ballroom given a new look, but the video security system was also modernised from the ground up and further expanded. 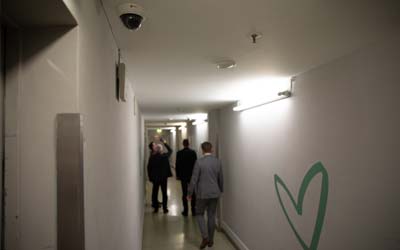 Within five days, a five-man team from Digicom renewed the entire system, which now consists of 38 cameras, at a rapid pace. This involved Tamer Vural's team laying down more than 100 metres of additional cable and installing two eneo multi-signal converters with 12 channels each as well as a network switch. A total of 14 eneo multi-signal cameras are in use. The installation was also partly carried out using eneo installation accessories such as wedge adapters and connection boxes. Four eneo EPOC cameras, which transmit IP signals via the existing analogue cabling and can also use this for the power supply, now also form part of the hotel's non-stop outdoor surveillance system. The IP-66 classified cameras, equipped with integrated infrared lighting, monitor the entrance area and the security-relevant zones facing the Bockenheim Anlage, such as the restaurant terrace and the swimming pool façade. Furthermore, in the building there are ten full HD network domes and four IP bullet cameras from the eneo EN series with a maximum resolution of three megapixels. The purpose of the surveillance is primarily to deter vandals and criminals, especially pickpockets who like to prowl around hotels. And of course the video security system should provide the guests with a feeling of security. Accordingly, the video security cameras keep a special eye on the lobby and the corridors. Other neuralgic points are the entrances to the lifts, the car park entrance and delivery zone, the emergency exits and the staff entrances.

For the upgrade of the video security system in the Hilton Frankfurt City Centre, Digicom GmbH relied upon the support of VIDEOR Consulting. The team headed by Thorsten Reichegger has already assisted the Göppingen-based company on several projects. You know each other and know that you can rely upon each other. 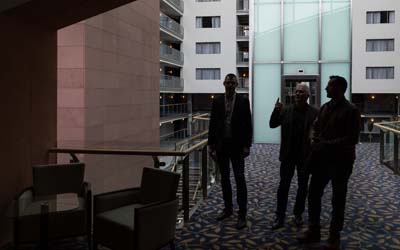 This was also the case with the work involved with the upgrade of the video security system at the Hilton Frankfurt City Centre. The ready-made pre-configured cameras, which were delivered "just in time" from Rödermark with detailed documentation, enabled rapid commissioning at the customer's premises.

The pre-configuration and the final function test for the cameras were carried out by VIDEOR consultant, Max Walzer, who was involved in the project from the very beginning. He set up the cameras according to Digicom's specifications, drew up the cabling plan for the entire system and also lent a hand himself at certain points during the work on site.

“The cooperation with Max”, Tamer Vural summed up, “was fantastic. With him we were able to settle everything very quickly through the short official channels. Thanks to his preliminary support, we were able to equip the server cabinet with the recording devices in advance in no time at all and knew that everything would be up and running when we connected the cameras on site”. And VIDEOR Consulting was also involved in the planning process.

Security and data protection: all on board

VIDEOR's consultants provide planning support or plan the complete video security system from scratch and create 3D models of the camera positioning based upon technical drawings. In this way legal problems can be avoided in advance. After all, the data protection-compliant implementation of video surveillance measures is not only a must following the introduction of the EU GDPR, also, and especially, for employers. But with the entry into force of the EU-wide Directive, the requirements as well as the responsibilities have once again increased significantly. 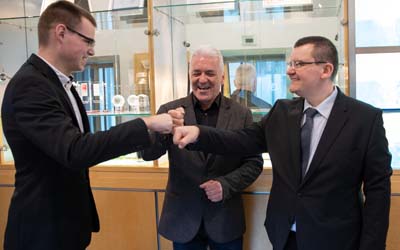 “We have to face up to these changing conditions”, the Facility Manager, Marco Stanic, explained, and continued: “The modernisation of the video security system was carried out in close consultation with our works council and in cooperation with TÜViT. Of course, such coordination processes clearly prolong the project duration. But this is the only way that we can ensure that our installation complies with the legal requirements and has the explicit consent of our workforce. We were concerned with finding a workable solution in which security and the right to information self-determination are precisely balanced. Thanks to very transparent communication, we were able to reach a general consensus and are very satisfied with the overall result”.

And Tamer Vural added: “On the basis of the planning which we worked out together with the VIDEOR team, all those responsible could understand where and at what angle the cameras were placed. Beyond these purely structural aspects, however, it is also possible to understand exactly what can be seen where, i.e. with what focus and what resolution recording takes place and how large the monitoring area is”. Access to the video data itself is based upon the four-eyes principle and requires double authentication. Only the data protection officers from the works council and the facility management are authorised to view the records on an ad hoc basis. After 96 hours the data is automatically deleted. Except for those cameras which overlook the reception and the barrier at the entrance to the underground car park. Your live video streams are connected to two monitors in the back office. Here we met Marcel Bundig, who told us how the modernisation of the system affects his daily work.

“It's a huge advantage for us”, the young man explained, pointing to one of the screens, “that we can oversee the situation in the reception area from the back office and control the access barrier. Our small command centre here makes our lives that much easier. This is especially true for the new camera which monitors the barrier”. This involves a multi-signal camera from the eneo Candid series, the full HD sensor of which, with its fixed lens focal length of 50 mm, is powerful enough to display clearly and legibly the number plates of the vehicles in the surveillance area. Furthermore, the camera is sufficiently light sensitive to use all the available brightness even in the residual light conditions after dark, and to deliver full colour images. Marcel Bundig is pleased with the improved image quality: “With its higher resolution and much sharper images, we can tell at a glance whether it's a supplier or a guest. And the camera in the reception area keeps us informed in real time about the volume of guests, so that we can inform colleagues and reinforce the reception staff if necessary. In addition to security, the system supports us in optimising our processes and ultimately our service quality”. 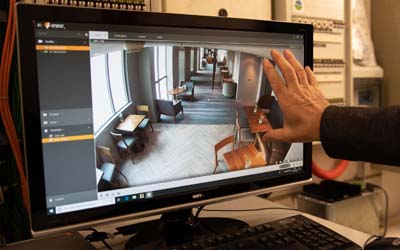 The video data of all the other cameras in the Hilton Frankfurt City Centre are managed on a system-wide basis with the eneo Center management software. Its user interface is tailored to meet the specific operational requirements of the video security applications and its intuitive design is very user-friendly. Facility Manager, Marko Stanic: “ It is important for us that there are no hurdles in terms of usability, so that even technically unskilled employees can work with the software. But the fact that the control of the software is so simply designed was a great surprise to me - a positive surprise”.

The IT Manager, Kai Powierski, agreed. “The software is really self-explanatory”. And as this is the case, the instructions in the video management with eneo Center could be ticked off in the shortest possible time during the commissioning of the entire system. Recording takes place on two 32-channel network recorders from the IER series located in the server room. The video data can be stored with a maximum resolution of eight megapixels at full frame rate. The integrated GDPR functions support system operators in data protection-compliant video data management using four-eye authentication, definable storage times, differentiated authorisation management, detailed log information and an automated password cycle. Redundant data storage is provided on the IEM-38R640005A virtual matrix, which allows up to 64 video sources to be managed on a common interface.