Gaining an edge on shoplifters: eneo at the BabyOne retail outlet in Isernhagen

BabyOne has grown into the largest German retailer for goods for infants and toddlers. In order to prevent shoplifting, the management of the specialist market in Isernhagen near Hannover has expanded its existing video security system with eneo IP cameras. A site visit. 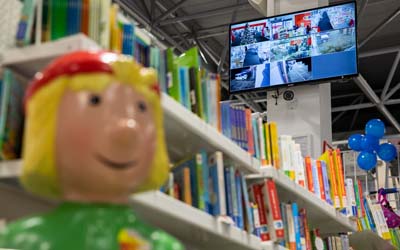 The BabyOne retail outlet in Isernhagen was opened in 2009 and is managed as a franchise. The sales area covers over 1,600 square metres on two levels – so it is impossible to keep track of the large range of goods here without video cameras.

Until now, however, the market management has refrained from providing the sales area with a video security system. Only the outside delivery area was monitored with two IP cameras, while the retail space itself was limited to dummy cameras.

As the inventory losses due to theft continued to rise and the shoplifters always behaved in a bold and blatant manner, a change of strategy was necessary - as the store manager Agnes Navid explained: “We had people here who drove up in estate cars and loaded small prams with small articles and then calmly pushed them to the exit. They had it methodically planned, had the car parked backwards in the customer parking lot, with the boot facing the entrance so that they could load up the stolen goods more quickly”. 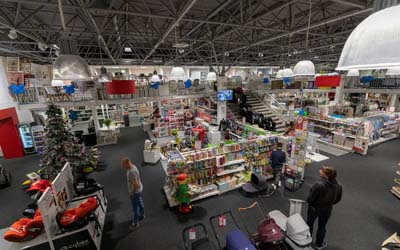 A drastic example, certainly. But unfortunately not an isolated case. If one adds to these full-blown raids the many cases of so-called occasional theft, it immediately becomes clear that shoplifters can cause immense damage over a financial year.

According to the EHI Retail Institute, in 2018 alone the total amount of inventory losses caused by customers amounted to 2.38 billion Euros in Germany.

A figure which particularly highlights a problem weighing upon the entire retail trade. With the expansion of the existing inventory system, the BabyOne site in Isernhagen should effectively bring an end to any such practices.

On personal recommendation, DIGICOM Informationstechnologie GmbH was commissioned with the planning and installation of the video surveillance across the sales area and in the customer parking area. 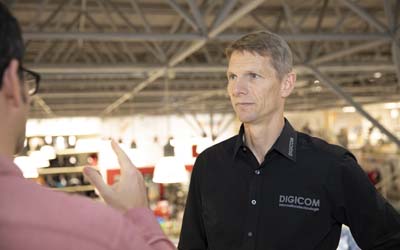 The company, which operates throughout Germany, implements and maintains customised solutions in the area of data transmission and security technology for customers in industry and commerce, and has decades of experience in the project business area. Onshore and offshore, DIGICOM's solution experts have the know-how and licences needed to service even satellite transmission systems on offshore platforms.

Frequently they have to develop the solution during their operations, without any previous opportunity to familiarise themselves with the local conditions.

“That's really fun!”, Dirk Bornemann, its leading radio and television master technician and specialist for satellite systems, told us. He has been part of the DIGICOM team for over 20 years and was responsible for the installation of the IP video system at BabyOne in Isernhagen. 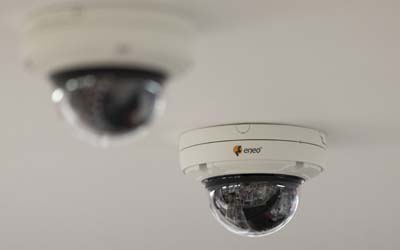 His enthusiasm for technical and craft-based challenges served him well, as the local conditions made the work quite a sporting affair in many ways.

Not only because it had to be done in two consecutive nightshifts – bearing in mind the needs of the daily business operations – but also and above all because of the sophisticated wiring which had to be carried out partly, and invisible to the viewer, across the open beam construction of the ceiling area. Several metres of network cable were drawn across the extensive sales area through empty guiding conduits to the EDP room and the server rack stationed there.

“If you've been building antennas for many years, you develop an eye for different possible ways of doing things”, Dirk Bornemann explained. Light strips had to be removed and reinstalled, precise holes had to be drilled. One centimetre wide of the mark and a pipe or cable could be damaged. 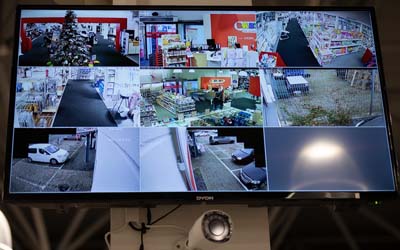 With good planning, a lot of experience and routine, DIGICOM carried out the job with pinpoint accuracy. “It's about speed, it's about reliability. That's what the customer expects from us, and that's what we expect from our supplier. In this regard, we can fully rely on eneo and VIDEOR”, Dirk Bornemann summed up, continuing: “In projects like this, you can appreciate VIDEOR's pre-configuration service. You unpack the system on-site, the cameras are labelled with IP addresses and you can rest assured that everything is working. This is always a good feeling, but if you install a system under time pressure and on the night shift like this, it is worth its weight in gold. DIGICOM and VIDEOR, we work well together, we have the same mentality in terms of customer orientation and professionalism”.

When you enter the market you immediately notice the so-called "Confrontation Screen", which is located directly opposite the entrance. Presented in split-screen format, different camera views across the indoor and outdoor areas are alternately displayed on the monitor, making it absolutely clear that there is video surveillance here.

The information signs placed at eye level in several places also have a deterrent function in addition to providing information. eneo IP cameras provide the high-resolution surveillance videos. “The cameras are discreet, work effectively and definitely offer good value for money”, Dirk Bornemann proposed. "When it comes to quality, eneo has nothing at all to hide”. There are several dome cameras from the eneo SN series with a motorised varifocal lens and Full HD resolution. They were mounted on the ceiling at strategically favourable positions above the shopping aisles, so that the events in the respective zones of the sales area can be surveyed extremely well from the overview monitors in the checkout area and in the market management office. 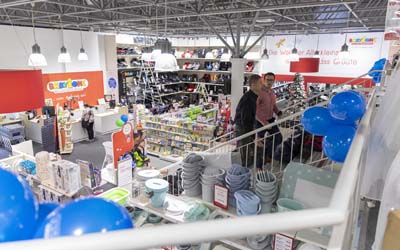 Presented in split-screen format, different camera views across the indoor and outdoor areas are alternately displayed on the monitor, making it absolutely clear that there is video surveillance here.

In addition, the eneo IP domes are equipped with intelligent, self-learning video analysis functions, which include motion detection and analysis, manipulation protection, and direction detection with an object counting function along with loitering and intrusion detection and person recognition.

The camera compensates for the sharp contrasts and differences in brightness often associated with the artificial lighting, which are common in sales areas, with image enhancement functions. The combination of variable focal length and P-iris control ensures a high focus depth and very good contrast. As with all eneo SN series cameras, the aperture of the network dome can be controlled precisely.

This prevents the lens from losing focus when zooming in and ensures that objects or people appear in sharp focus and are easily recognisable, even at greater distances. This makes the P-Iris feature especially useful for the video surveillance of the hallways and shopping aisles found at BabyOne. 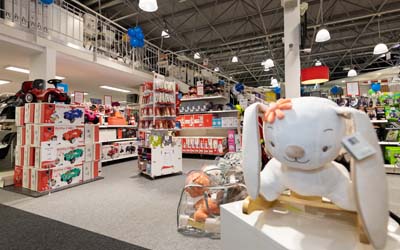 And finally, while the 99 x 144 mm eneo IP Domes are visible enough to intimidate potential shoplifters, they also fit in well and unobtrusively in the environment with their white casings.
Bullet network cameras from the eneo EN series monitor the customer car park, the entrance area and the pram department. They are IP66 classified and can be used both inside and outside.

Equipped with a motorised varifocal lens, these compact day-night cameras deliver a maximum video resolution of four megapixels. Of particular importance for use at the BabyOne location in Isernhagen are the freely definable privacy zones, which allow GDPR-compliant video surveillance of the parking area: they have been set up in such a way that neither passers-by nor passing cars are recorded by the cameras. Only the vehicles in the retailer’s parking area are recorded.

As a result, thanks to the high resolution of the eneo Bullet cameras, it is very easy to recognise in detail what happens there. And, in the event of any incident, the licence plates of the vehicles entering or leaving can be clearly identified from the still images.

Proven and easy to use

The eneo IP cameras installed in the BabyOne retail outlet are supported by the ONVIF protocol and are controlled by a Synology VisualStation VS360HD – a line-up which has already proven itself in DIGICOM Informationstechnologie GmbH’s numerous installations. 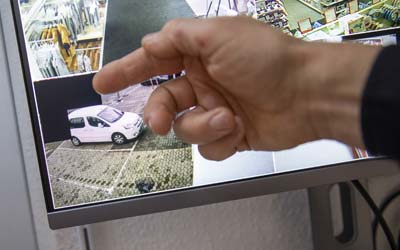 The solution is ideal for small and medium-sized video security systems, cost-effective, space-saving and does not require a PC. Thanks to their user-friendly interface, even non-specialists can operate the station without any restrictions after a short briefing.

The video data is recorded on a Synology 4-bay NAS server (RS818plus), which has the capacity to cover applications of this type and size without any problems. “The VIDEOR technical personnel know exactly what bit-rates to set without overloading the device. And their technical support is very much on the ball, should there ever be a problem. I wouldn't say the same for any other supplier”, Dirk Bornemann stated.

The store manager, Agnes Navid, is also very satisfied with both the project implementation and the video security system itself: “From our perspective, this has already paid off, because the theft rate has dropped noticeably. The other day we had a case where a person, who was obviously about to steal a pram, just changed his mind again - right in front of the entrance!”